The health benefits of moringa include relief from stomach disorders, allergies and edema. The antioxidant power of moringa aids in liver protection, diabetes, eye protection, cardiovascular health, bone health, uroliathiasis, wound healing, healthy hair and skin. It is rich in antibacterial and antifungal properties that  help to fight various infections, including herpes.

It is rich in phytonutrients, which are effective for preventing various medical conditions such as cancer, neurodegenerative diseases, bronchial asthma, sickle cell disease, nephrotoxicity, high cholesterol, high blood pressure, anemia, and obesity, as well as helping to build a strong immune system.

Moringa oleifera, also known as drumstick tree, is a highly valued and versatile plant which belongs to the Moringaceae family. It is a fast growing, deciduous tree that is native to India and is widely cultivated in tropical and subtropical areas all over Asia, Africa and South America. It is widely known with many other names, including Horseradish tree and Ben oil tree.

Although modern science has only recently discovered its value, moringa has been imparting a multitude of benefits across various cultures since ancient times. It was valued by the Romans, Egyptians and Greeks for its medicinal impact on a range of ailments. Today, its usage has been encouraged by various humanitarian organizations to combat malnutrition and its effects in poverty-stricken regions, mainly due to its economic viability and rapid growth.

The moringa tree has thick, whitish bark with droopy, fragile branches and long, green, oval-shaped leaflets. In Ayurvedic therapy, it is valued for its impressive range of therapeutic uses, commonly attributed to its antifungal, antiviral, antidepressant and anti-inflammatory properties. In some areas, it is simply known as ‘shigru’.

Moringa leaves and pods are a nutritional powerhouse and provide a great range and amount of essential proteins, vitamins and minerals. It is a rich source of essential amino acids, which are the building blocks of proteins. It also contains a significant amount of vitamins such as vitamin A, vitamin B1 (thiamine), B2 (riboflavin), B3 (niacin), B-6, folate and ascorbic acid (vitamin C). The mineral wealth of moringa includes calcium, potassium, iron, magnesium, phosphorous and zinc. It contains very low amount of fats and offers no harmful cholesterol.

Moringa contains an immense wealth of healthy components and phytonutrients. Due to its extraordinary and unmatched range of medicinal benefits, it was named the “miracle tree” during the food crisis in Africa. In the Philippines, it is revered as mother’s best friend because of its galactogogic properties. The benefits of moringa for medical conditions include the following: 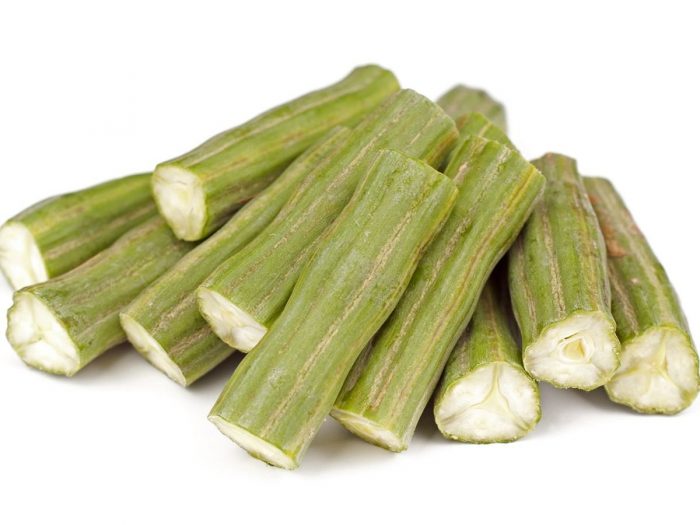 Edema: Moringa extracts are beneficial in the treatment of edema. Research studies have confirmed that treatment with moringa oleifera root extract, which possesess anti-inflammatory qualities, has been significantly effective in inhibiting the development of edema. Moreover, the studies suggest that the efficacy of moringa herb stands equal with the potent anti-inflammatory medicine indomethacin in the treatment of such painful conditions.

Cancer: Moringa is an anticancer agent and is highly valued in tumor therapy. Scientific research has demonstrated that moringa extracts possess chemopreventive properties attributed to the presence of the phenolic components quercetin and kaempferol. Another study has demonstrated the role of the bioactive compound niazimicin in restraining the development of cancer cells. Moringa extracts impart chemomodulatory effects towards curing various types of cancers such as ovarian cancer, hepatic carcinogenesis and skin papillomagenesis by inhibiting the proliferation of malignant cancer cells and inducing apoptosis, also known as programmed cell death.

Neurodegenerative Diseases: The effectiveness of moringa has been very valuable in the treatment of neurodegenerative diseases. Research studies have shown that treatment with moringa extracts have the potential to alter brain monoamines like norepinephrine, serotonin and dopamine, and it even extends its protection against monoaminergic deficiencies related to Alzheimer’s disease.

Bone Health: Moringa extracts are beneficial for maintaining healthy bones, which is attributed to the presence of essential minerals like calcium and phosphorous. Its extracts possess anti-inflammatory properties and are effective in the treatment of painful conditions such as arthritis, while also helping to heal various bone ailments such as mandibular or jaw bone fracture.

Immunosuppressive Effects: The seeds of moringa oleifera possess immunosuppressive properties. Deliberate immunosuppression is required to inhibit the activation of body’s immune system in order to prevent the rejection of certain treatments, particularly organ transplants and autoimmune diseases like rheumatoid arthritis. Research studies have demonstrated that the immunosuppressive action of moringa seeds helps in ameliorating the production of antibodies to allow for the new organs and transplanted material to settle safely in the body.

Herpes: It is effective against the infection caused by herpes simplex virus. The healing effects of moringa herb prevent the development of skin lesions and inhibit the formation of plaque caused by the infecting virus.

Cardiovascular Protection: Moringa extracts are helpful in the prevention of myocardial or cardiac damage, due to the presence of powerful antioxidants. Research studies conducted on this subject have provided supporting evidence that proves the antiperoxidative and cardio-protective effects of moringa therapy. Treatment with it helps in inhibiting the increase in lipid perioxidation in the myocardial tissue and aids in maintaining a healthy heart.

Asthma: The benefits of moringa plant extracts also include relief from bronchial asthma and inflammation caused in the airways. According to research, treatment with moringa helps to reduce the severity of asthmatic attacks and various symptoms such as wheezing, cough, dyspnea and tightness of the chest. It extends its protective effects against bronchial constrictions and encourages better lung function and respiration.

Hair Care: The favorable effects of moringa seed oil for healthy hair have been appreciated since ancient times. It is highly effectual in cleansing and purifying the hair and protects it from environmental damage, including ultra violet radiation. It serves as a valuable conditioner for the scalp, strengthens the roots, and stimulates hair growth.

Urolithiasis: Moringa extracts are effective against the formation of stones in the kidney, bladder and uterus. According to research studies, the administration of moringa root exerted anti-urolithiatic activity and resulted in a noteworthy reduction in the urinary oxalate levels. The curative effect of moringa has also shown a reduction in the formation of stone deposits and aids in regulating endogenous oxalate synthesis.

Hypertension: Moringa is effective in maintaining optimal levels of blood pressure in the body. Bioactive components such as isothiocyanate and niaziminin that are present in it prevent the thickening of arteries and reduce the development of pulmonary hypertension.

Sickle Cell Disease: Moringa oleifera is effective in the treatment of sickle cell disease. Recent studies have validated the anti-sickling potential of moringa plant extracts, which is attributed to the presence of zinc and flavonols such as kaempferol, quercitin, and acacetin as well as phenolic acids such as melilotic acid and vanillic acid.